ABOUT US - CHARLIE AND McD 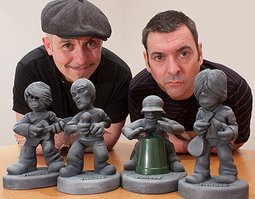 Two colleagues with a passion for creating collectibles are bringing their first project to life in an unusual celebration of fandom: rock and roll garden gnomes.

Greenock born Music promoter and DJ Andrew McDermid, and designer Charlie Boyle from Glasgow created the Gnome Roses after a conversation about their respective glory days.

Andrew, 44 recalls: "I was talking to Charlie about touring with world famous bands back in my twenties, and now that I'm older and settled, how great it would be to have a reminder of those days in the corner of my garden".

"I suggested creating a caricature of gnomes based on classic bands, but Charlie suggested we actually make models… and the Gnome Roses were born."

Charlie, 40 explained the creative thinking behind the plan: "A lot of good ideas are the result of combining two things that have nothing in common. Andrew's path led him from rock and roll, to rock gardens!

"I think it's interesting to explore how far being a fan goes for some people. Everyone has their favourite band on a tshirt, but I liked the idea of a fan's devotion cropping up in unexpected places."

Like a lot of pipedreams, this project took much longer to realise than expected. The job of making the gnomes started long before their inspiration, the Stone Roses, announced their reunion in June 2012.

"We couldn't believe it" explained Andrew: "The Stone Roses were always a band whose fans held dear for a long time. Our gnomes were just another way of expressing our appreciation of them, because we thought we'd never get an opportunity to show how much we appreciated them standing in a concert crowd".

Now that their first set of rockery-rockers have made it to the real world, Andrew and Charlie are realising just how many people share their enthusiasm in making an ultimate fan statement.

Andrew added: "So many people didn't understand when we told them our plans, but when they see the gnomes, its inevitable they fall in love with them. Our Facebook page is proving very popular!"

The pair are now turning their attention to the rooftop gardens of New York City, for inspiration in their next project - the Ra-nomes.